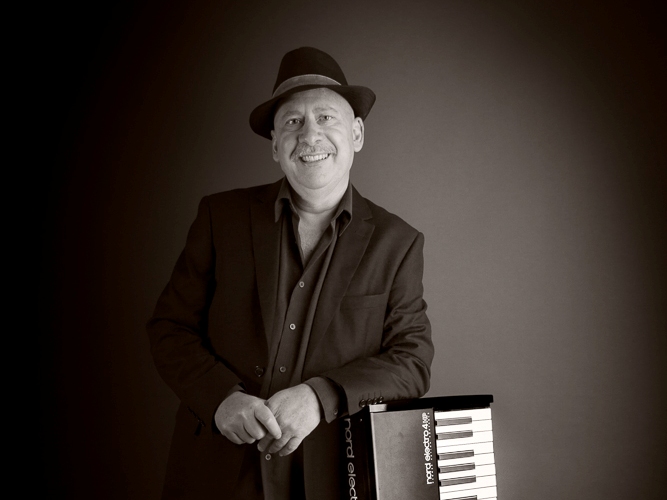 Some of my best musical phrases are rests.

What kind of keyboard is that?

I’m a chameleon.  I could actually be competing with myself.

In the late 80’s, I started around here with the Elm City Blues Project, Whiskey River, and Garry & The Mood Swingers.  Two tours of duty, Garry!  Once wasn’t enough!  “I quit!”… eight years later, “I’m back!” and with Garry’s “2DYE4,” because we just couldn’t get enough.

At Carmen Anthony’s they move the piano around and snap off the pedals.  It’s so battered at this point, I’ve duct-taped it and put a piece of plywood under it.  One other guy plays it:  Jeff Weisselberg.  We text each other from the piano, and it’s like, “Oh my God, I got a salad plate under it now.”

[When I play there] it’s like four hours of nothing.  [By the time I get finished] I don’t think I know another song.  [Let’s see…] how many ways from Sunday can I play?

We’re in our third year of residency at Maugle Sierra Vineyards.  The owner there will text me from somewhere and say, “Break’s over!”

The load in at Lenny’s blows.  Cut a friggin’ staircase in the deck!  And Lloyd is just gonna be one of those twist your nipples kind of guys.  What, another 3-6:00 facing west?  Gimme a reason!  It’s NOT the money!

I play with Memphis Soul.  The fact that Rob Jocco can get seven guys on a band stand and make it happen… that’s something.

Bill Hollman can kick my ass on keyboard.  And he’s a nice guy too, which makes you hate him even more.

This summer I think I’ll have some time.  It won’t be like “Honey… uh, can you walk the cat?”