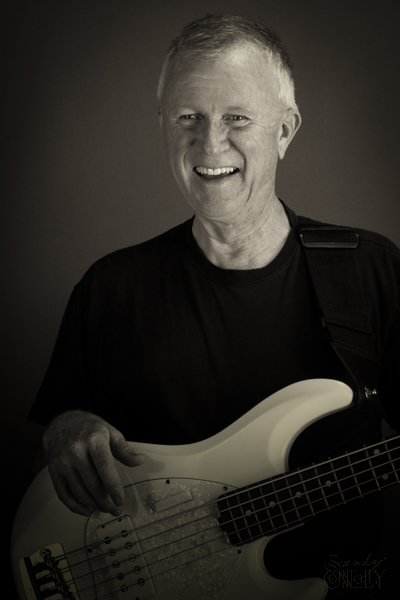 How many amps?
Just this one. This is my new favorite.
Why is it your new favorite?
Because guitar players won’t play too loud. They like to hear themselves, and if they can’t hear the bass, they might turn down, and low and behold, the audience starts to hear a strange thing about some bands. They have a thing called vocals.

Let me hear about the bass you’re holding.
This is my favorite bass of any I’ve ever owned. It’s a 1992 Music Man Sting Ray 5. I became completely sold on five-strings in 1989.
What sold you on a 5-string?
I’m lazy, and I can play an E right here, and I can go down and play a low D and a low C which is great, so I have the advantage of being able to play that low string. And I like being able to get the lower tones. It moves my pants’ legs… (That’s a stock and standard bass player quote.) “If it ain’t moving your pants’ leg, it ain’t loud enough.” Bernie and I have argued about that many times. When we played together 20 years ago, he was always, “Turn your bass down!” Me, “I ain’t turning it down. It ain’t moving my pants’ legs!”

The story [my first five string]…  I was playing in Borderline which was a country group based out of Hartford. I bought it on Friday afternoon, showed up, and played the gig Friday night on it. And boy were they swearing at me because I kept getting lost.

That was a Fender Jazz Plus. I wanted a Music Man, so I started looking at Sting Ray Fives, and they were all like $1,500, and I’m like “Wow, that’s pricey. I can’t really afford that. I am, in fact, a graduate student.” So I was home in Dalton one day and I went into Bigham’s Discount Music.  Iva Bigham, who inherited the store from her father, had a way about her that you’d ask her how much something was, and she’d say, “Aw that’s $500,” and then she’d just kind of walk up to you, [and say under her breath] “but I’ll give it to you for $350.”

Later on..I was telling my son, who is also a bass player, “Hey, I went into Iva’s today and bought a bass.” “DID YOU BUY THE MUSIC MAN?!” “Yeah, I bought the Music Man.” “You SON OF A BITCH!” I said, “Do you realize what you’re calling your grandmother?” Both of my sons are bass players and guitar players. And I said “Well, son, you’re gonna get it, but you’re gonna have to wait for me to die. Ha ha!” And I thought to myself, “I’m really glad that he lives in Georgia, and I live in Connecticut so I don’t have to worry about him murdering me in my sleep.”

What do you remember being the first inspiration for wanting to play music?
Oh my God, I know that like the back of my hand. I just pissed off my cousin Rodney just this summer by telling the story. [Rodney is my favorite cousin, more like a brother.] We started playing together, and we’re both still playing after 50 years. I started playing music because I was gonna be damned if that Rodney Nelson was gonna play music and I wasn’t. I got into it because Rodney was playing.

[I played my first gig with Rodney]. I played a Magnus Chord Organ that probably cost $12. You could actually press single buttons and make whole chords, and we played in Summerville Georgia for a dance at the recreation center/gymnasium, and the Animals’ “House of the Rising Sun” had just come out, and so it was current. I remember playing that song with Rodney.

Wait, so what was the very first song that you learned?
I learned to make a G chord, and strum it and go “Things go better with Coke! Cha, Cha, Cha!” And I’m like, “Oh! I can play something that kinda, remotely resembles music!”

So you played that first song, but what was the next step? Wait, what made you pick the bass?
I started on the guitar, but I went to bass real quick because that’s what I heard. When I heard a song, that’s the first thing I heard. I feel like as a natural ability, as a guitar player, I don’t think there’d be anybody who would want to play with me. And I did play lead in a pretty successful band in my late teens… we played all over the Southeast. And I sucked. All I was interested in was trying to be fast. And get as much distortion on it as I could so the notes would all run together…

So what was the repertoire that drew you into playing bass?
It started with the Rolling Stones, but I don’t particularly like Bill Wyman as a bass player. Never did. But I got into the Stones because it pissed Rodney off. Rodney liked the Beatles. Secretly I liked the Beatles because Paul McCartney is a bass-playing God. So, I always loved the Beatles, but I never let on to Rodney that I liked them. I used to say, “Man! Beatles will be dead and gone, and the Rolling Stones will still be playing music!” And, believe me, every time I see him, I never let him forget that there are still only two Beatles alive, and the Rolling Stones are STILL TOURING! But the fact is, I love The Beatles.

I don’t admit it much, but [when I started playing I used to like] The Association.

Why don’t you want to admit it?
Because The Association was a bunch of pussies. “Along Comes Mary,” what a piece of crap, come on! The part I liked was really great harmony… I have a theory… when something is so spectacularly masterful and complete as a Beatles song, all that fancy harmony just moves to the background, and you’re hearing the whole song. When it’s The Association, and they’re singing a piece of shit like “Along Comes Mary,” and they’ve got spectacular harmony but the song sucks, all the harmony’s right in front so you can hear it!

Band names?
Shades of Blue that changed to Royales (a God-awful name), Illusions of Blackness which got shortened to Illusions because we kept getting booked in all-black dance rooms that thought we were a black soul band… after that there were many that were too numerous to remember.. and then I sold all my equipment, quit playing music, literally went to work in Jackson, Tennessee running a go-kart track…

Then I came back to Dalton and became a part of the Chattanooga music scene. The Ramada 23rd Street Band.Before that, I played with the Jimmy Tawater Show at Dino’s. Jimmy would always take the newest member and give him a 50’s name, and for whatever reason he declared me to be John Burch. And I’m like, “Come on! Moose McCluskey or, you know, Fonzie! John Burch? Really?” So we slicked our hair back, and I had a pair of glasses that made me look just like Les Nesman.

I played with a guy named Adam Gosdin…. I remember the musicians more than I remember the band names… I played at a place called the Copper Dollar Saloon on Buford Highway. I saw a guy get shot and killed right in front of me. And I said, “You know what? It ain’t worth this. I’m outta here.” That was the last of my Atlanta playing.

Oh I forgot! Before I went to Atlanta, I played with the Johnny Green Show. That was my last foray into Vegas show bands. That was great because we used to close the show (it was like I couldn’t even look at the audience) with the American Trilogy, and the drummer (who had a full set of timpani) was playing “Dum, dum, dum, dum!” and Donna Mickey, the female vocalist, was standing with a little crown on her head and two sparklers like the Statue of Liberty, and the American Flag would unfurl behind her. It was so hokey. I only lasted six weeks with them, but I had to tell you about that show ending.

Talks about coming to New Haven to get his doctorate at Yale. I ask about the music scene here.

We were playing at the Groton Motor Inn every Friday and Saturday night, and I won’t say the drummer was bad, but I will say that… he sang too, and he used to come out and do six or eight songs where we used a drum machine and he’d be singing… I used to look forward to playing with the drum machine. So we were a really bad pop group. Doing songs like “Woman in Red,” stuff like that.

What happened after that?
Well, I’m going crazy. I want to play, but this just really stinks! There was a band called Caribou that was advertising for a bass player… so I went and auditioned. I met Terry Sutton and played with him. I played two or three songs, and he turned to the drummer and said, “That’s what a country bass player sounds like. All these rock n’ roll bass players you been bringing in here… they play too much. This is how you play country music.”

Later on, I played with Borderline and the Avenues. When that band kind of split up, that’s when Bernie and I and Tommy McGregor formed the Mobiles. Then after the Mobiles, I put together [a band called] Blaze. We had the best three-part harmony of any band I’ve ever played with. And then I started playing with Mike Savino and the Sons. The Green Stamps came about because Mike Savino had been running the Open Mic at June’s, and he lost his gig, and they didn’t have anybody to run the open mic, and I stepped in and said “I’ll run it.” And so I started running it, and one night, Brian Wilkens walks in and sits in and plays about six bars of a song, and my mind says “I’m gonna latch on to this guy!”

You talked about everything except for…
Certain Bass… that is handmade, custom-made bass made by Dave Certain. I wanted a slab-bodied, 5-string, 1951 P Bass. He’s in St. Louis. It took him about two years to build it. He said, “Most instruments are factory-assembled loosely, so it’s not tight enough. I’m not happy with any screw in any one of my basses unless I’ve had to fight with it to get it in. It’s that putting it together that tight like that that makes the resonance.” He’s right. That’s a great sounding bass, but I never take it out and play it. I don’t know why. Just cuz I like my other ones better. Oh, I know why I don’t play it. When I’m playing on a dark stage, the fret markers are hard to see.

The compliments that mean the most to me are the ones that come out in the spur of the moment, and Mike Roth gave me a great compliment after we had played the Country Tavern the other night. I don’t know if it would be a good compliment to somebody else.

What did he say?
He said, “You know what I like about playing with you? It’s not what you play. It’s what you don’t play.” To me, that means a lot cuz that takes a lot of work!

Ha! Yes, Jil and I will say about another musician… and even singers… “All the notes all the time.” And that’s not a compliment.

I had no idea that you did all that stuff.
I was a repo man. I stole cars for a living.