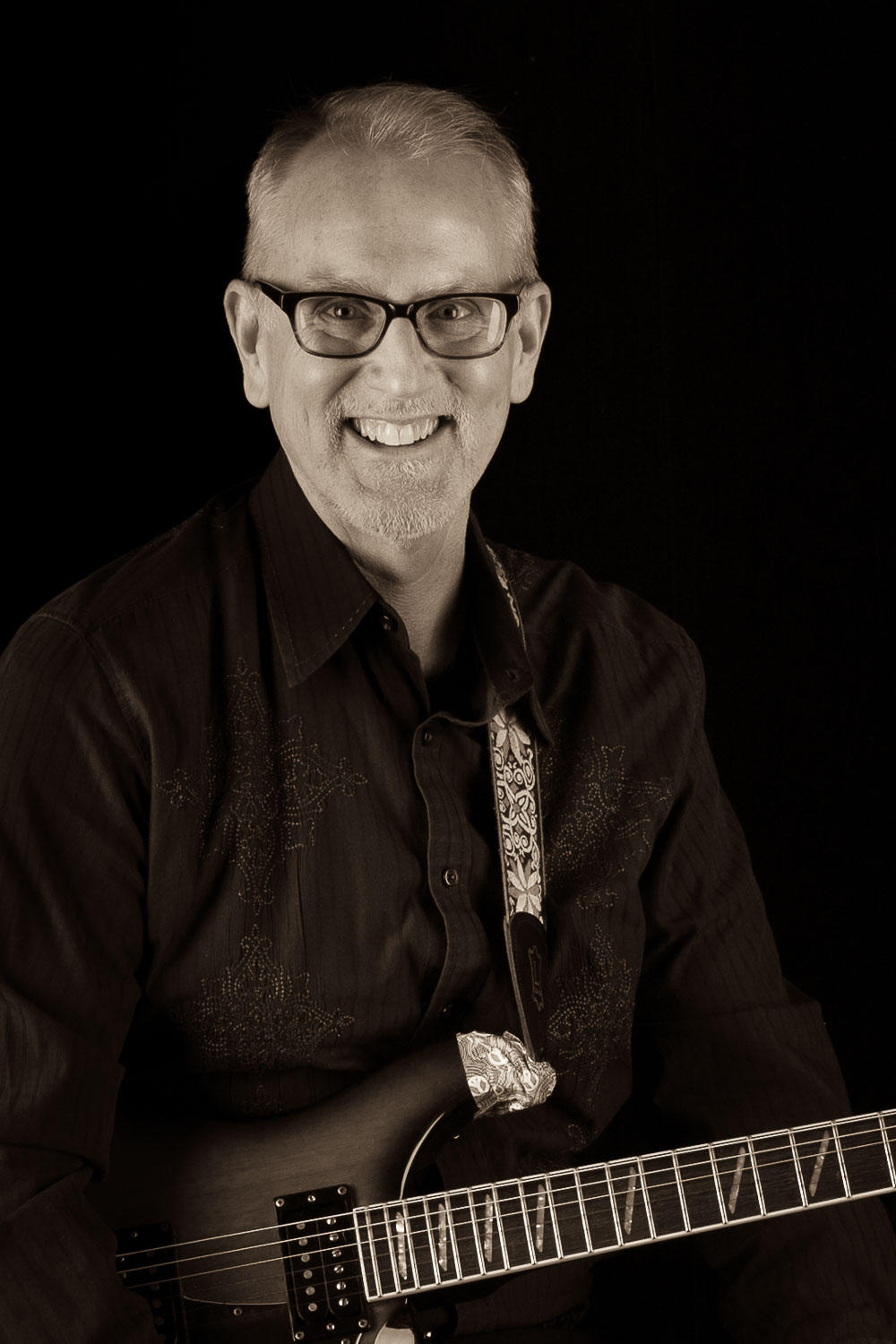 When did you know you wanted to play?

That’s easy. I have a distinct memory of watching Jimmy Page play on Don Kirschner’s Rock Concert. I loved Led Zeppelin and when I saw the long hair, the black silver-trimmed shirt, the dragon pants, the double neck Gibson SG, the violin bow, I was absolutely hooked!
The whole band was amazing looking and just the hardest rocking group ever, but I never forgot those dragon pants, and that double neck guitar. Jimmy is certainly one of the great guitar gods.

How old were you?

15 or 16 years old. In the mid – late seventies, we loved to stay up to watch Saturday Night Live at 11:30 and Rock Concert at 1:00. You usually got a live rock act on SNL, then a variety of bands on Rock Concert.

So, then what happened? You wanted to be Jimmy Page with the dragon pants?

That’s kind of true, but I had enough self-awareness to know I should never wear dragon pants. It was this amazingly cool image that he and the whole band had, and the amazing songs, too. The combination of it all, their image, the songs, it absolutely entranced me to want to play the guitar. So yes, I wanted to play like him and be as good- well, I knew I wasn’t going to be as good, and I couldn’t really pull of the dragon pants, either.

Were you playing anything at that point?

I think it is safe to say I was not playing anything at that point- besides trumpet in band. And I think once I got interested in guitar the trumpet went ‘buh-bye.’ No more trumpet.

So now, tell me about your first guitar teacher.

Oh, my first guitar teacher- His name was Dave Martin. He was a student home between semesters from Berklee College of Music.

What town was this?

So, you grew up in Branford?

I grew up in Branford. After I saw the Jimmy Page, I really wanted to play the guitar, and I guess that got through to my parents. They went down to the local music store called ‘Harmony Music.’

It was on Laurel Street, across from the Branford library. My parents went in there and bought that guitar right there (Ibanez dreadnought acoustic). I had failed to mention that I really want an electric guitar, but I was happy just to get started. This was 1977 or 1978 and they arranged for me to have lessons there. Dave Martin, being from Berklee wanted to teach me jazz. He had their guitar method books and we dove right into note reading and chords and picking, right hand, left hand technique. He was teaching me all the traditional things, except I didn’t really play jazz, and I didn’t really listen to it. So, I wasn’t really connecting to it musically, but I was learning sight reading, chords and rhythm. It was okay to learn this way, but I wasn’t getting any closer to dragon pants.

So now you’re sixteen- what are you listening to?

Were any of your friends musicians?

I joined a high school band in 1978, and we were all just getting started. Two of the kids were in the high school band, so they had more musical skills. We were called ‘Emanon,’ which is “no name” spelled backwards. Not my idea.

How was your playing at that point?

I’m gonna say awesome. But it was probably terrible, but good enough to get gigs at high school parties. I was with them for two years. It was just an awesome time.

Were you with that teacher anymore?

No. Dave went back to Berklee, and a teacher named Don Grimes took his place. He was a super cool guy, who would teach me anything I wanted, and he’s the guy who got me the Sal Salvador books.

What happened after Emanon?

I went to college – Boston University. The only thing I really did with music was acoustic coffee house gigs. My Ibanez acoustic guitar helped me make friends, and I met with a girl named Shelly. Great singer, and she loved Neil Young, and I loved Neil Young, so we’d play half an hour coffee houses with twenty-five minutes of Neil Young and five minutes of something else. That was basically just in dormitories, it was informal, and I didn’t play in a band then.

Were you studying at all or just going to school? Taking music lessons I mean.

I was not studying music at all. In my junior year, I took a music theory elective. In a very short time, the teacher was playing intervals on the piano and asking us to sing them. I could play and read notes on the staff, but the moment they got into solfège, I went “eh… can’t do that!”

I did take that class and I did bail, because I was too self-conscious of the skills I lacked. The people in the class could sing and name intervals – by ear – and that was just beyond my ability.

So, you went there, and you played acoustic things, and then what?

After I graduated, I worked for a record store chain called “Strawberries,” which has come and gone now. I had a great time working there. Both local musicians and famous people came in all the time. And I’d get autographs and have little conversations. I met one of my closest friends there who was Peter Wolf’s secretary, and he was a pretty big deal with J. Geils back then!

I was working full time, and I wasn’t concentrating on playing music at all. My only memory of playing at that time was with these guys who were looking for a bass player. I’d never played bass in my life and I said “sure, why not.” I figured I could transition the bottom four strings of the guitar to the bass.

It was my most embarrassing musical experience for sure. I had way too much confidence that I could play bass, and I’d totally underestimated the musicianship of the band members who had asked me to come.

And you figured “what do they know?” Haven’t we all done that, and then you get in there and you go, “Crap.”

Yeah, so that’s exactly what happened, and I kept my trap shut for a while after that. I don’t think I really got back to playing until after I got married in 1991. I saw the Shoreline Arts Alliance offering a pretty extensive guitar program that was taught by Jim Martin, who teaches at ECA. He is a well-known jazz guitar instructor, and I did his whole course, and that was when I became passionate about studying guitar again. He offered four modules; there were six other people in the class, but as we got down to the third module, there were two or three. It was jazz centered, and I was introduced to lots of chords, scales, arpeggios, and jazz standards.

Even though I loved rock music, I kept getting involved with jazz teachers!

What are all the bands you’ve played in?

My first band was Blind Ambition. I met Bill Carroll through Tabor Arts and he was looking to form a band. I eventually joined with him, Bill Bailey- bass, Bill Belenardo- drums, and Gino Popolizio on vocals. We had some changes and Denise Parri and Rick Comes, and Joe Pecoraro joined, and we became “The Reactions.” The Reactions played lots of gigs for many years. I became a bit weary of the schedule and left the band to take some time off and explore other opportunities.

And then you got into John Liebler’s project?

Or otherwise now known as “The Racket Downstairs”. I met John at your house on a student performance night, and we got along well. We certainly had the same sense of humor! I’d never worked with a songwriter, so that was interesting to me. John writes some pretty cool songs and he welcomes collaboration, so it filled a musical niche for me.