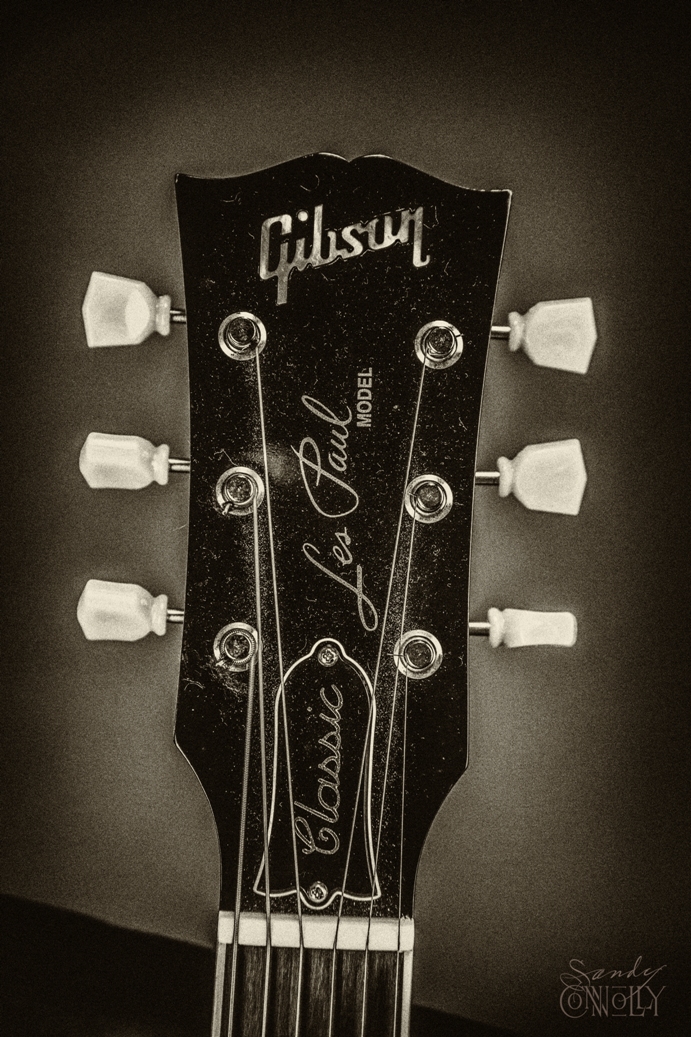 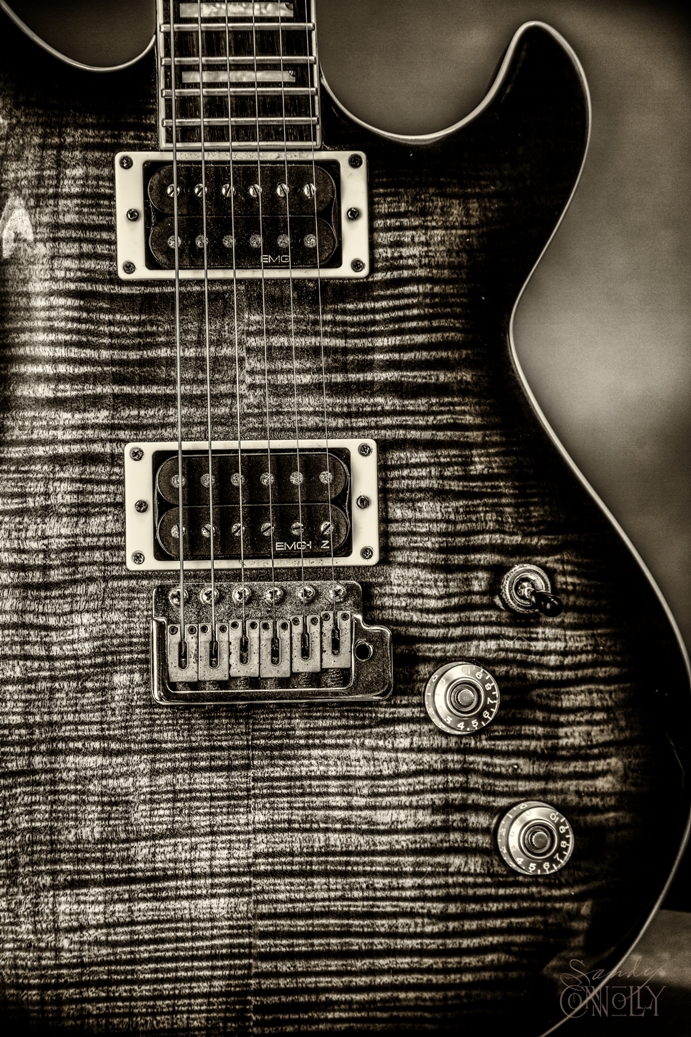 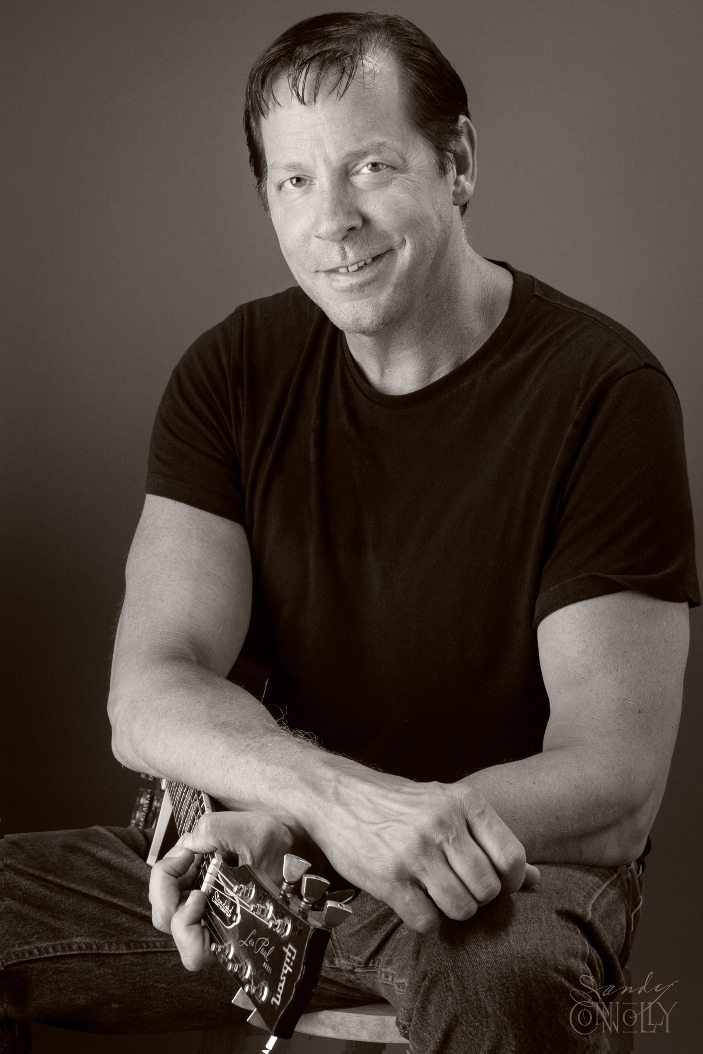 Sam: I think the [photo] you took for the band website is good.
Sandy: Yeah, that’s good, but I think I can do better than that.

Sam (looking at Pete Blossom’s pedal board shot): That pedal board makes mine look tame. I can’t handle something like that because my feet are so large, it’s hard to be accurate. I always end up stepping on the wrong stuff. It was only a few years ago that Steve Lackey was dissing me for having a lot of pedals. He’s got five times as many as I do now!

Showing Sam Tony’s interview on the website:
Sam: Now was this a continuous stream of consciousness or was it just excerpts? Cuz I don’t think I can be that clever… It would probably take multiple interviews. “That’s a wrap! I think we got one quote!”

Sandy: What first got you interested in playing music?
Sam: It had nothing to do with the piano lessons that I was required to take. Even though I kind of liked the teacher.
Sandy: Who made you take piano lessons?
Sam: Well, my mother was a well-schooled pianist. She thought it was all de rigeur to the upbringing of properly socialized and inculturated children that you take piano lessons. Some people say that there are only two [instruments] that are acceptable: the piano and the violin.
Sandy: I’ve heard that.
Sam: But I took the lesson with Mr. Catalano before school would start, and then he would actually drive me to school. It was quite memorable because he had Dodge Dart and the transmission was push button. In middle school, my parents thought I might do better in school if I went to Independent Day School in Middlefield. And they sent me there where I met a completely different variety of people. They exposed me to things like the Allman Brothers Live at the Philmore East which is one of the epic rock albums of all time and also things like the Grateful Dead, Europe ’72. And I heard this stuff, and, at some level, even though I hadn’t had any aspirations to be a musician, it must have resonated with me because I started paying more attention to friends of mine who knew how to play a few chords on guitar, and I’d ask them a few things, and then I became exposed to Eric Clapton, and my life was never the same after that.

Sandy: What was the first thing you heard?

Sam: By Eric Clapton, it was an album called The History of Eric Clapton which was quite ironic because that was released in the early ’70s, and now we’re in 2014 and Eric Clapton is still going strong. But on the “B” side, they had a couple of bonus cuts that were jams, not really polished tunes. I couldn’t detect any mistakes, but they were stretching out, and that just got to me. And I just thought, “Wow! That is so cool! What I would give to be like him!”

Sandy: Do you remember where you were?

Sam: The first time I listened to Eric Clapton I was in the living room of my good friend Andy Kahn. …Then I went to the Gunnery. While there, I sort of encountered a counter-cultural lifestyle, and yet, at the same time, I was one of the more promising athletes that that Gunnery had ever had on the rowing team, and so I had sort of this duel existence at the Gunnery, a big portion of which involved listening to Eric Clapton and Grateful Dead and Crosby, Stills, and Nash, and Young… that kind of stuff.

Sam: The conclusion to the piano lessons was that my mother and my teacher mutually concluded after a year or so that I had no promise whatsoever. And it’s not that I didn’t like it, I just didn’t like the things that he wanted me to learn how to play like “Are You Sleeping Brother John?” I wanted to learn the riff that’s in the theme song for Bonanza that had cowboys and horses in it and guns and ten-gallon hats. That was very much more inspiring me. There was also a time when I listen to the AM pop radio.

Sings a little “Knock three times on the ceiling if you want me.”

Sam: This was really bad AM radio that I was listening to. Then I was exposed to the Beatles.

Sam: Someone gave me what I think is called a Kalimba? Do you know that that is?
Sandy: Yes. I have one.
Sam: And I would listen to Eric Clapton and Jimi Hendrix and try to solo on that thing.
Sandy: HA HA!!! I LOVE THAT!
Sam: I shudder to think how awful that must have sounded.

Sandy: So you’re really just absorbing all this music.
Sam: And I’m trying to figure out a way to express myself having no skills whatsoever. I want to. This Kalimba instrument seems like a nice entry level sort half into the direction of musical…

Sandy: So you have to cut to the chase and tell me who put a guitar in your hand. How did that happen?
Sam: My close friend Anthony Paguni who is a former boyfriend of my sister’s, I often inherited my sister’s boyfriends… NOT IN AN INAPPROPRIATE WAY, mind you!! They became friends of the family, and after they came to the conclusion that my sister was too challenging, they became my friend, and, anyhow, Tony was a very accomplished guitar player. I remember he could play Bob Seeger’s “Night Moves” with perfect strumming technique.
Sandy: How old were you at this point?
Sam: 16 or 17… still in high school, starting to think, “Hey, some of my friends can play guitar, and if they can do it, maybe I could.” And he actually loaned me one of his acoustic guitars. It was a Madeira which was an off-brand of Guild, and the strings were all about a foot off of the neck. It was unplayable, but that didn’t stop me from trying. It was painful, and it built character. And the very first thing I learned how to play was just a 12-bar blues throwing in a couple of Eric Clapton riffs.

Sandy: What was the next significant thing that happened?
Sam: I eventually, to the dismay of family and friends, graduated from high school and made it to college to a fairly respectable institution. There I met more guitar players, many of whom who were WAY more advanced. At this point I could only strum a few chords and play one or two riffs. But I gradually, through great persistance and, much to the consternation of my neighbors, beside me, above and below (at Conn College), I developed some skills. By the time I got out of college, I was good enough that I could actually jam with people.

Sandy: You didn’t take any lessons?
Sam: I did take a music theory course at Connecticut College. It was affectionately known as “Clapping for Credit,” and I aced that course. Then I kept lumbering along on the guitar throughout the mid-80’s to mid-90’s. At one point I was in a band that was actually hip, we played 80’s music, and, fortunately, there was another guitarist who was much more advanced than I was, so I played rhythm. We played songs like Pat Benetar, and other female vocalists hence the name Dirty Blonde… we had a female vocalist. Fortunately, I was so ignorant to my lack of skills at that juncture, that I played with this irrational exhuberance that had sort of an infectious naivite, and people would join us.

Sam: I’m talking too much! You should be holding up cue cards that say, “Shut up!”

Sam: Can you Photoshop in some huge sideburns?

Sandy: Would you give me in ten sentences or less, your band history?
Sam: How long can the sentences be?
Sandy: Between Dirty Blonde and today.
Sam: That was in my mid-20’s. I was in that band, Dirty Blonde. And I was in a band in Meriden. They called us Sammy and the Snakes. I DIDN’T THINK OF THE NAME!! People who were close and signficant to me strongly dissapproved of the name, but I was overruled in the band, so it was Sammy and the Snakes. From that, a smaller band split off with a great vocalist, Warren McDaniel. A couple of people sought me out… Tim Barry… Bruce Manly… So that led to variations on bands that featured Tim Barry and Bruce.

Sandy: What was the Tim Barry band?
Sam: It was called The Dynamics. Around the time that the Dynamics was disintegrating I became aware of another former musician friend of mine who was trying to establish an open blues jam thing in Branford at the [church] that’s out in the marshes… and the Blues Jam evolved out of that. That is how I eventually met the famous and talented Sandy Connolly and became a member of various bands… and Sandy and I and certain bass players formed the nucleus.. other people kind of come and go. And that brings me from starting guitar late in high school, and here I am today.

Sandy: Isn’t this Cort guitar the cheapest guitar of all of them?
Sam: Yeah, by far! I probably pay it more than any other guitar.
Sandy: Why is that?
Sam: It’s very versatile. It’s light-weight.

Sam: Justin has the same keyboard as Tony?
Sandy: The exact same keyboard because of Tony.
Sam: Justin’s a smart guy… really smart. Justin is amazingly talented, and, in addition to that, he’s gonna cure cancer and figure out all sorts of stuff all while inhaling on his vaporizer.

Sam: I remember the last time I got together with [Tony] to play, it was obviously something you had facilitated, I remember him saying, “I gotta watch out for you! You choose some fancy chords sometimes!”

Sam: You see the red Les Paul there? I had to buy that after seeing this video [George Harrison and Ringo Starr playing “While My Guitar Gently Weeps” with Elton John and Eric Clapton playing the Les Paul]