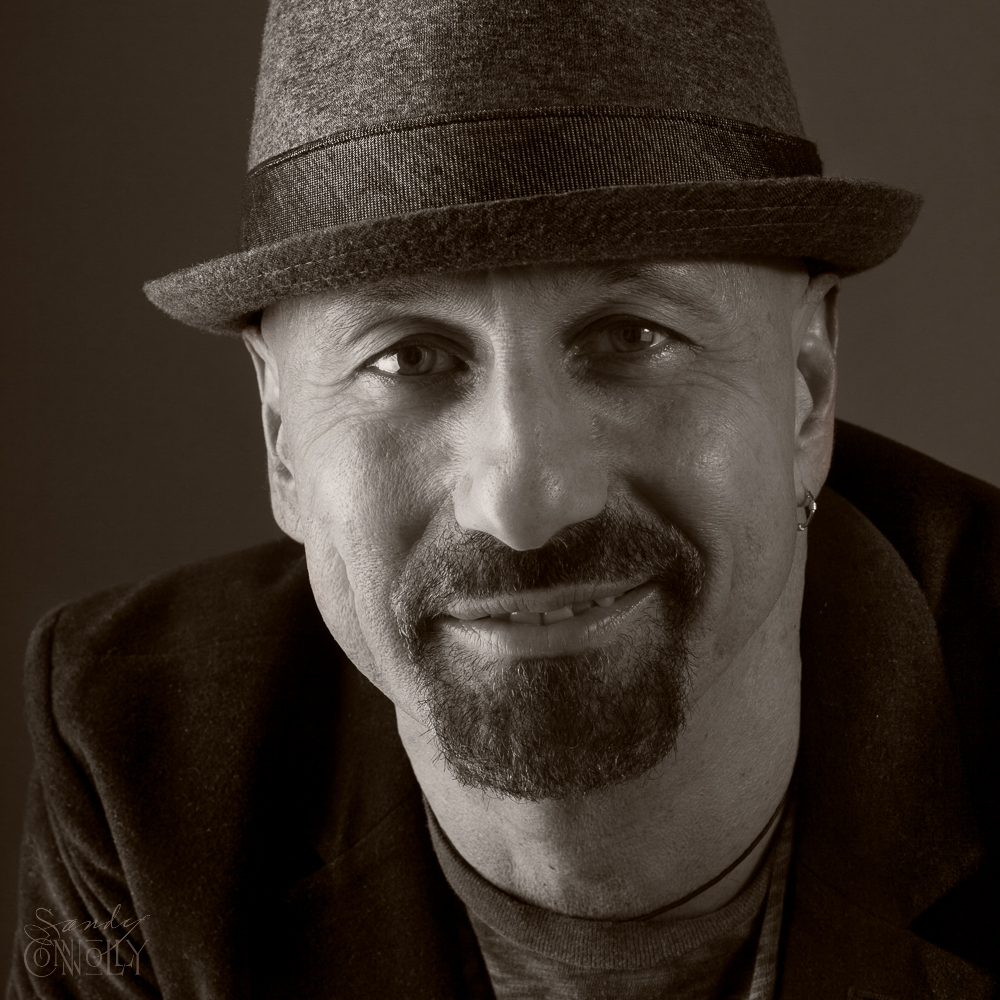 So you’re not going to print the calendar?

Everyone wants the calendar.

We want a calendar.

You and Tom Knapp want a calendar.

What?! He said the same thing? That’s what I’ve been saying to everybody: “I’m doing a photo shoot.” And they’re like “What for?” and I say, “Calendars.”

I think I’m dressed too much… I want to take the jacket off and just have a t-shirt so I can be like Superman.

Buddy Rich. My dad used to wake me up at whenever the Johnny Carson show was… 11:30 or something. I’d go to sleep and then he would wake me up to watch Buddy Rich at like 12 o’clock.

Is your dad a musician?

I gotta change my head. This is my very favorite snare drum.

Because it’s good to me. I bring it to bed and I cuddle with it.

How did you get started?

I liked the drums, and my parents bought me a little drum set. And I started banging around and my father introduced me to a guy named Tony Gaha who was the drummer for Travars. Do you remember the band Travars? They were a disco band. Taverius. He was Australian. He brought me to see The Cornelius Brothers and Sister Rose when I was like 8 or 9. And I saw them at Paul’s Mall which is on Boyleston Street? In Boston. And they came out, and they were all dressed up with sparkles, and if you’d go online and listen to their music, and it was like, I don’t even know. 70’s? Whatever.

And they put me in the front row. There were tables. For some reason, he had pull. He could do anything.

I sat at the table in the front, and the drums were jamming. They had a full rhythm section. And then Sister Rose came out. And she was just like… she had a little short dress on, and she was just banging. She was just great. And I was like: This is what I wanna do!” And that was it.

It wasn’t her. It was the band, really. I mean, it was the whole experience.  It was like “Wow!” It was fantastic. After that, I really just got into playing.

Do you have any rituals of preparation before you play?

Getting to the gig and setting up my gear. Going to the bathroom. Taking my shoes off. I play barefoot. Getting something to drink.

You don’t have any weird ones?

Like quirky stuff? I’m too busy just setting up getting things together, getting my sound.

Any gigs that stand out?

I’ve done a trillion performances. Oh, well, yeah! When I played with Carly Simon. Jesse Norman was singing, like…

Jesse Norman! No way. She was with Carly Simon?

They were doing a duet, and I was playing drums. And that was pretty special because not only that but everybody else was there. And it was a Mike Nichols house. Diane Shore is married to Mike Nichols, and they have a house on Martha’s Vineyard, and I stayed with Carly Simon.

I did. I was in Carly Simon’s house rehearsing in her basement. And I stayed in one of the rooms in her house.

That’s pretty cool. Was she there?

Of course she was there. She brought me to the room that I was staying in.

If I had know you were going to take a picture of it, I would have put a brand new head on it [Gretch snaredrum]. The sound bar is made by Roland. It’s a trigger that runs into a computer, and I trigger different sounds with it. It’s called a sound bar, and it’s made by Roland.

Where you playing tonight?

….Some of the greatest musical moments have happened on my deck with my friends, and I’m sad that I don’t have any of that recorded.