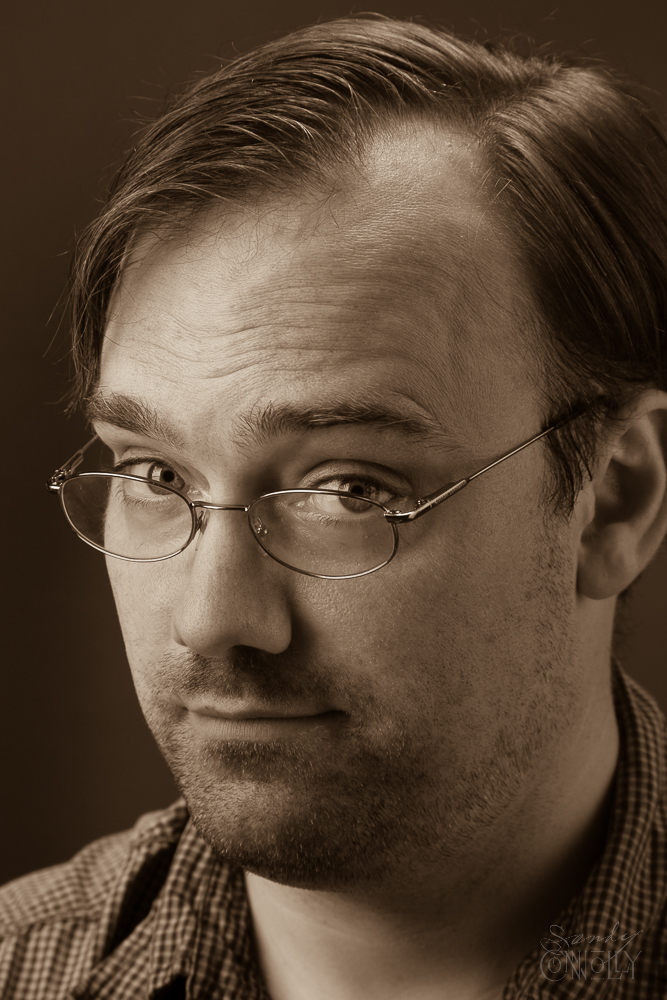 J: I wonder what the reaction was last night in the bar when my music came on. I think one of them was Lucinda Williams.

S: What do you mean?

J: I put in four songs on the juke box, and then I left. I was in the queue. When I was programming the juke box, this guy came up behind me and said, “Well, what are you playing?” He was a little intimidating. I was looking at what they had by Green Day, and he was like, “Don’t play Green Day! They suck!” 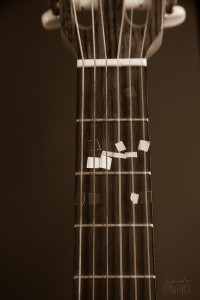 Pointing to his guitar

J: These stickers are from when I was trying to teach Jill how to play guitar. They’re not for me.

J: She asked me to put them there so she could learn some chords.

S: Which of these instruments have you had for the longest?

J: That guitar. I’ve had that since high school because I played lead guitar in high school. That was what I played in the band.

S: Well, so tell me about these guitars.

J: One’s a steel string and one’s a nylon.

S: How long have you had them?

J: I used the electric guitar for playing “Wild Thing.” We played “Stairway to Heaven” and Jimi Hendrix. The first guitar I played was my dad’s. It was acoustic. The banjo I got when I graduated college. The guitelele, which I forgot, I bought on Cape Cod for my birthday. A birthday present to myself for $100.

Sits and plays a bit on the banjo.

J: I have to teach my kids all the jokes I used to know.

S: Yeah, it’s your job!
S: What instrument did you learn how to play first?

S: Why was it the piano?

J: I wanted to learn piano. I don’t remember why, but I wrote a letter to my parents asking for a piano. I wrote a poem, actually. I think I was six.

S: And it worked?

S: Why did you want one so bad?

J: I don’t remember. But I remember the day it came, it was like they were trying to make it a surprise for me. So it was delivered to the front of the house, and it was covered. And they were still trying to keep the surprise going, but I knew what it was because it was the shape of a piano. Ha ha!

J: I was trying to play along with it and pretending that I didn’t know what it was till they unveiled it. Ha ha! Just to be polite. And then I took lessons. I learned classical stuff, I learned “The Entertainer.” I was learning classical pieces mostly. My musical taste changed in 8th grade. I started listening to The Beatles, and I got all their albums. I grew up listening to my parents’ Beatles’ albums a lot, but I didn’t get into them really myself and start playing album collections until 8th grade. My parents had a lot of great records: John Harpford, Maria Muldaur, Beatles, Bob Dylan. My dad was into the Kingston Trio. And, of course, my parents played together and sang together. They were in a band with a couple of my dad’s friends from Sikorsky called Liberty Folk Band cause my dad was from Liberty.

J: I first learned how to play songs as opposed to classical pieces on my dad’s guitar. And that’s when I started learning what a chord is. Cause I bought those books, like The Beatles, that had all those chords in TAB, and I learned to play the songs from that.

S: So you didn’t learn that on the piano.

J: Not until afterwards. My piano teachers didn’t teach me how to build a chord.

S: Mine never did either!

S: When did you start writing?

J: The last year of high school, we were all supposed to do a senior project. We got the last two weeks of high school off. And my friends wanted to form a band, and our project was to make an album of original songs.

J: Yeah, we did like six songs. We had to write the songs and record them. I had a TASCAM four-track… before Garage Band. And so I wrote “Dragons.”

S: Do you still have the album?

J: I’ve got it here on my iPod. It’s not my greatest work ever.

S: What are you doing now?

J: I’m playing in the Sandy Connolly Band and having a good time.

S: Yeah, you have to say that.

J: And I’m playing at Open Mics. Now I’m playing in another band with John [Liebler] and Mark [Casio].

J: While I was playing the band, I learned how to play solo guitar and a bunch of chords on electric guitar.

S: Did you keep writing songs after that?

J: Here and there. When we got married, I wrote a song for the reception. At some point I got interested in jazz and jazz standards and music from the 20’s, 30’s, and 40’s. That was when I started to learn 7ths and 9ths on the piano. That’s when I stared improvising on the piano. I taught myself all that.

S: I was asking before why it took so long for you to start playing professionally, but you were explaining that you got married, and then you went to medical school…

J: And had children. It was the Open Mic that got me back into performing. I played Rudy’s party before I started playing with you on July 4 last year. I guess that was John Liebler’s doing. Ever since I was in a band, I always looked back on it as something I wanted to do again.